The Bridge at Green Street

4th Wednesday of the Month

4th Wednesday of the Month

Donation hours are 8am to 6pm from Monday – Thursday at

We are currently not accepting bike donations. 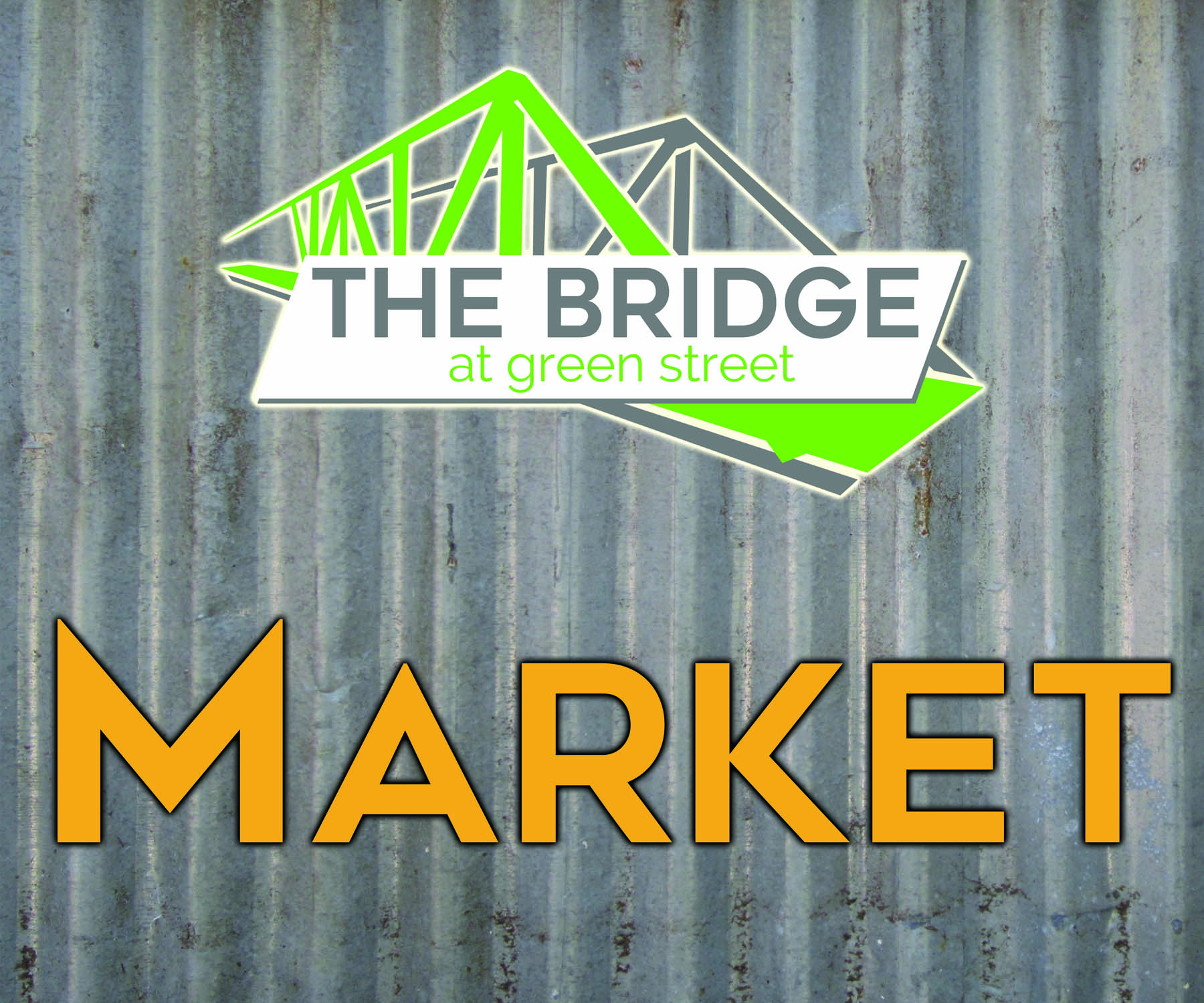 The Bridge at Green Street does not and shall  not discriminate based on race, color, national origin, sex, religious creed, disability, age, political beliefs or reprisal or retaliation of prior civil rights activity in any program or activity conducted or funded by the USDA.

The Market is open

4th Wednesday of the month

If you qualify for food assistance, you are able to receive a food box from our market once per month during hours of operation.  You qualify if you receive EBT, SSI or TANF or fall below the specified income guidelines. Those income guidelines are posted at The Bridge. You do not need an appointment for a food box. 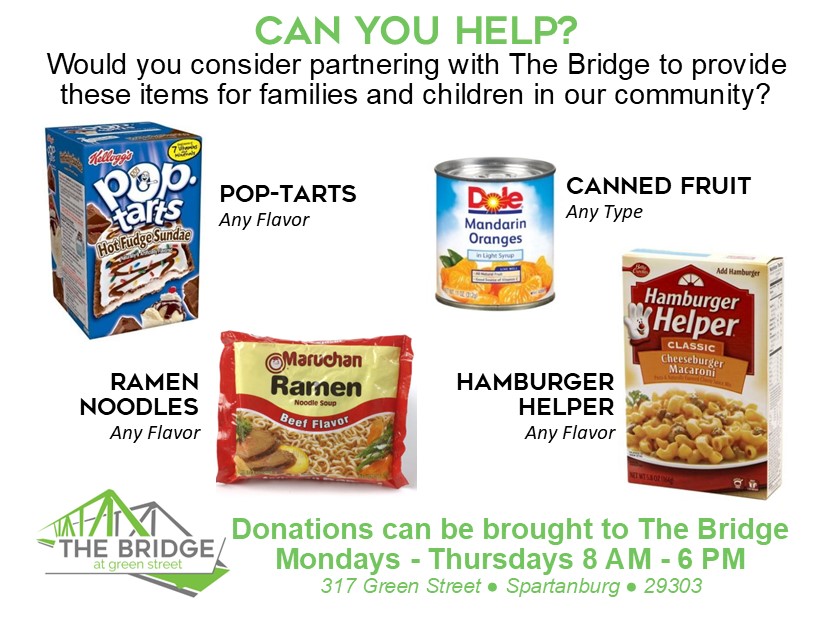 If you would like to organize a food drive for your business, school, or organization. Please send us an email at TheBridge@fbs.org 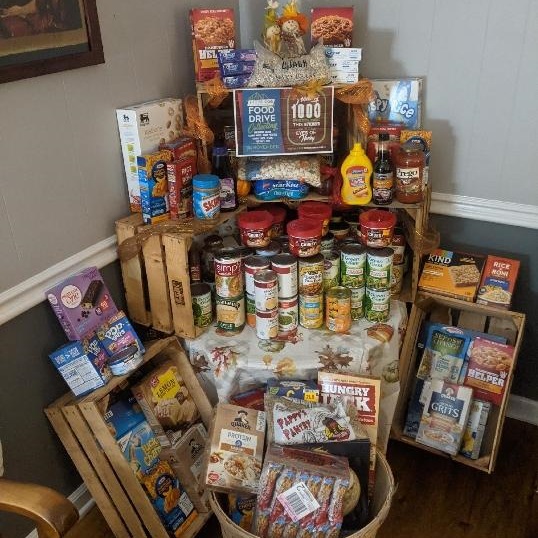 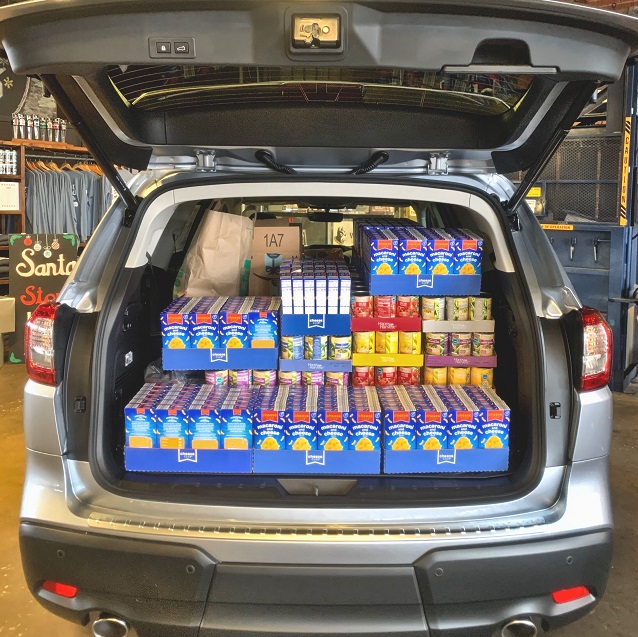 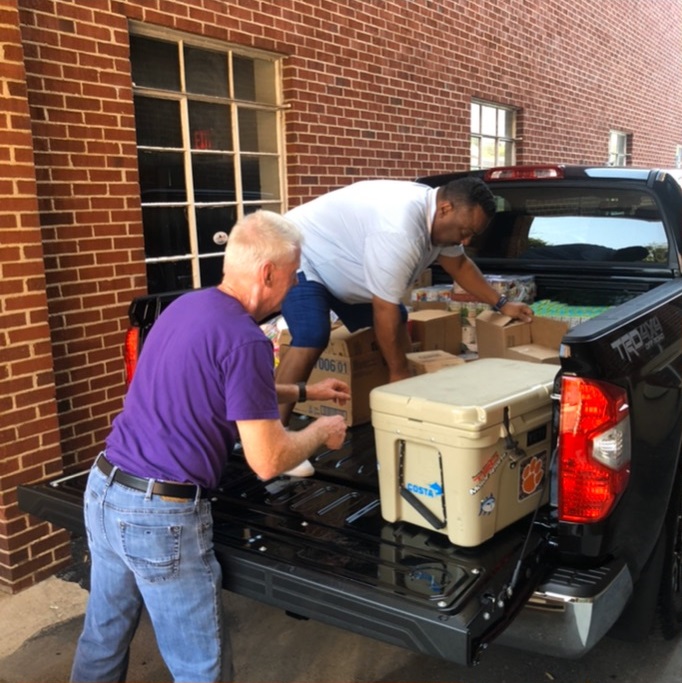 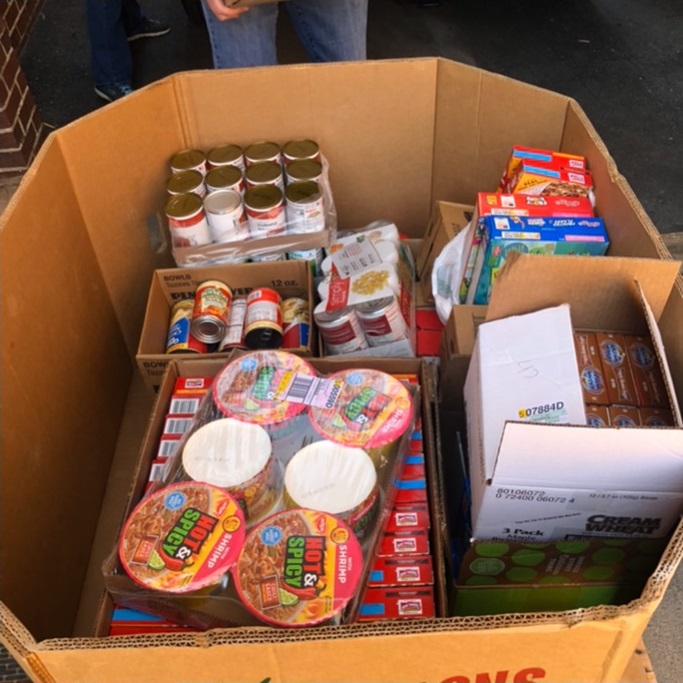 The Bridge has a clothing Wearhouse which is full of wonderful gently worn clothing. We have clothing for adults and children, as well as a Baby Boutique, which may include baby items other than clothing. Anyone is welcome to shop!  Items are available for a $3 donation per bag. Larger items that do not fit in our bag are a $5 donation per item. You may shop once per week, and purchase up to three bags per week.

The Wearhouse is open

4th Wednesday of the month

We are currently not accepting applications for financial assistnace. Please check back at a later time.

The Bridge at Green Street is able to provide limited financial assistance through the generous contributions of First Baptist Spartanburg members and other community partners.  If you are seeking financial assistance you will need to schedule a Financial Counseling Appointment with a member of our Team, and assistance is not guaranteed. We are unable to offer rental-assistance unless you have a referral from one of our partner agencies. If you are seeking rental assistance but do not have an agency referral, please go to sc211.org. Please complete and submit the Intake Form by clicking on the link provided.  Someone will be in touch with you within 48 – 72 hours.

Bridge Bikes are available for a $20 donation, which includes a helmet and a lock, Monday thru Thursdays from 9 am to 12 noon.  Bikes are available ONLY to those who do not have another form of transportation to get to work.  An ID Is required and so is proof of employment.  Bikes can only be received once per year and a Bridge Bike Agreement needs to be signed.  Bikes can only be given to the actual individual with ID. 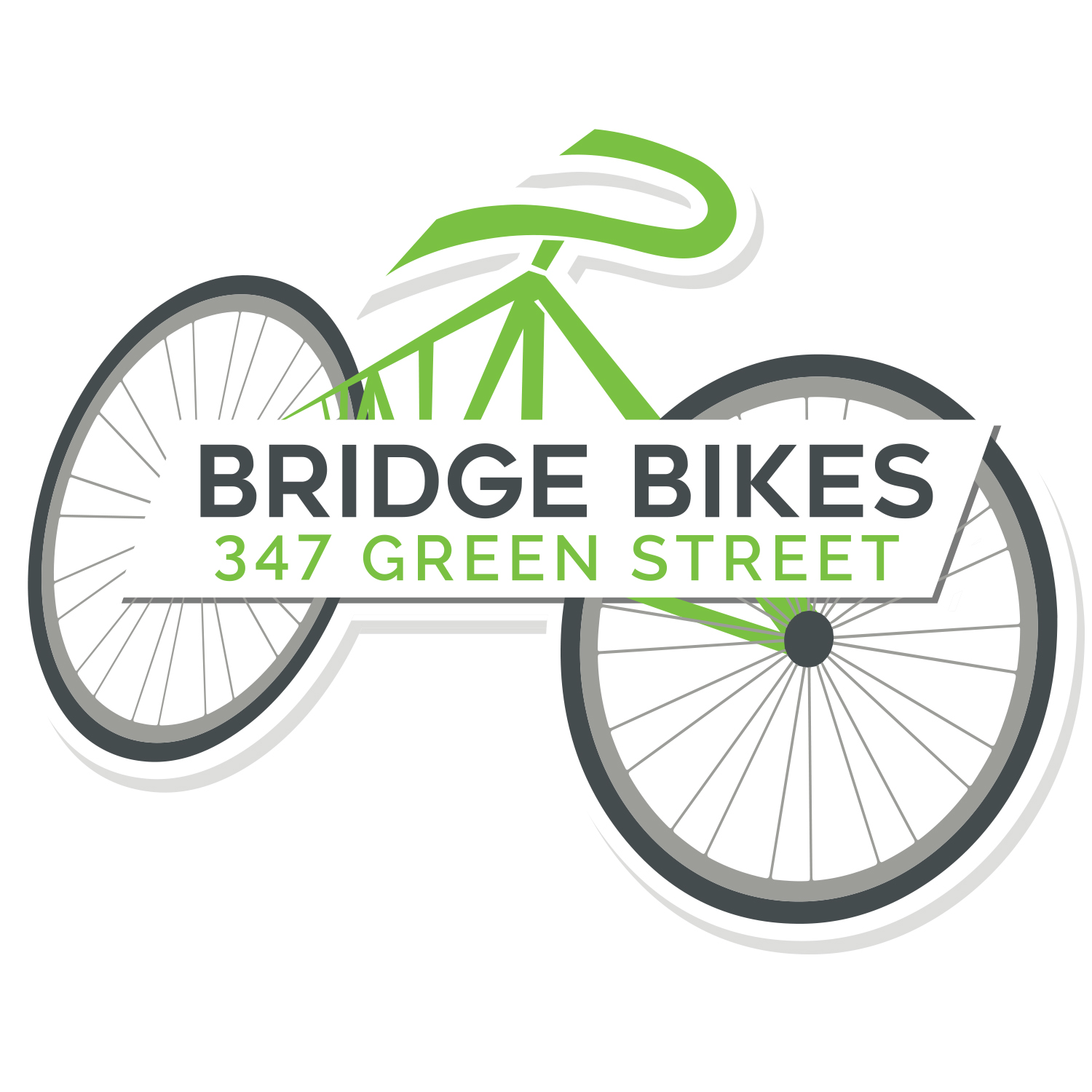 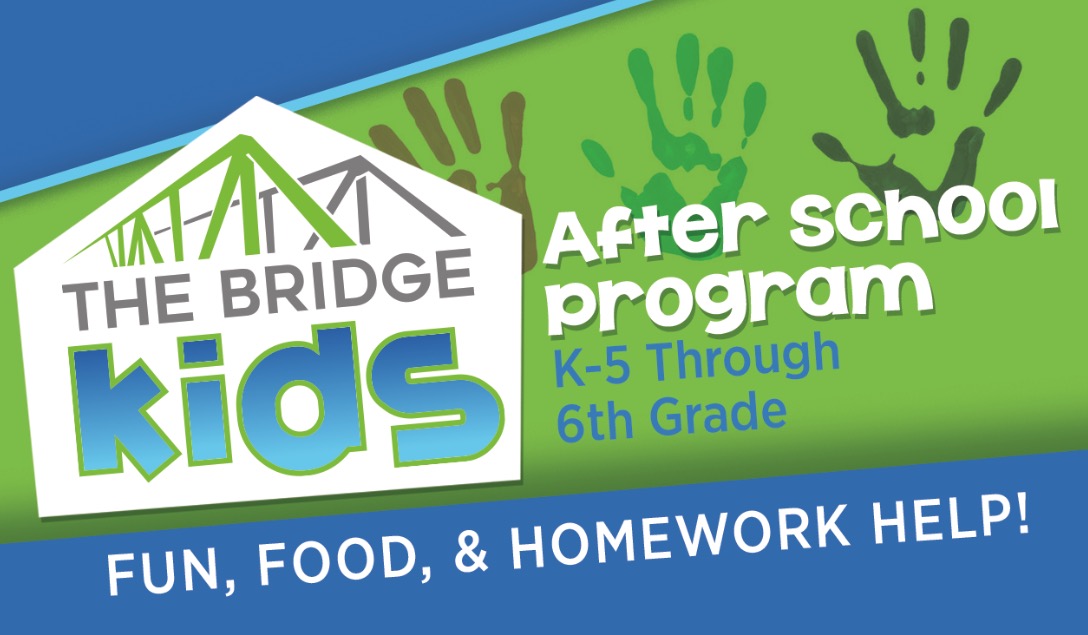 Bridge Kids is an after school program for Spartanburg Northside children K-5 through 5th Grade, Thursday Afternoons 2:30–5:15 PM at The Bridge. Kids can come for fun, food, and homework help! If you would like to volunteer with Bridge Kids, contact thebridge@fbs.org or call 864-699-4450.

The Bridge Scholars is our ministry to Middle School students.  They usually attend Carver Middle School and come to The Bridge Monday’s and Wednesday’s from 3:30 – 6:00. If you are interested in registering your child, please email thebridge@fbs.org or call 864-699-4450. 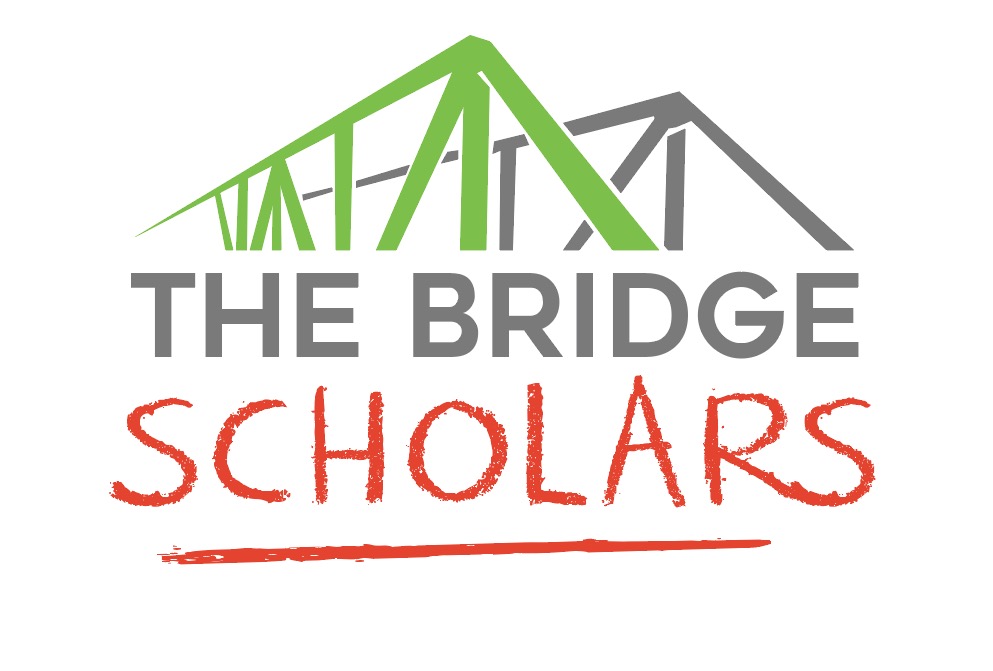 If you are interested in volunteering please watch the Orientation Video first. Afterwards, please click on the link below to complete the Volunteer Application form. We will be back in touch with you soon. 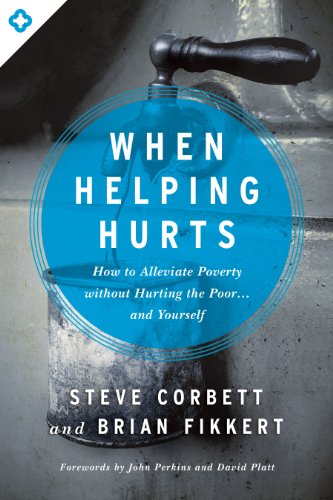 When Helping Hurts: How to Alleviate Poverty Without Hurting the Poor . . . and Yourself

Poverty is much more than simply a lack of material resources, and it takes much more than donations and handouts to solve it. When Helping Hurts shows how some alleviation efforts, failing to consider the complexities of poverty, have actually (and unintentionally) done more harm than good.

But it looks ahead. It encourages us to see the dignity in everyone, to empower the materially poor, and to know that we are all uniquely needy—and that God in the gospel is reconciling all things to himself.

Focusing on both North American and Majority World contexts, When Helping Hurts provides proven strategies for effective poverty alleviation, catalyzing the idea that sustainable change comes not from the outside in, but from the inside out. 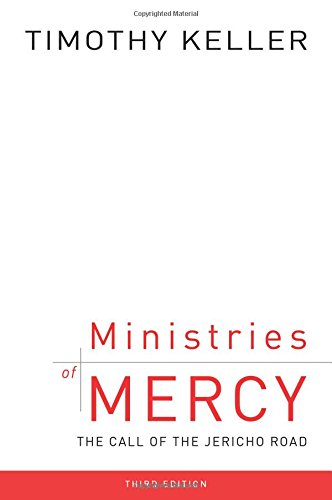 Why would someone risk his safety, upend his schedule, deplete his bank balance, and become dirty and bloody to help a person of another race and social class?

And why would Jesus tell us, “Go and do likewise”?

The Good Samaritan didn’t ignore the battered man on the Jericho road. Like him, we’re aware of people in need around us—the widow next door, the family strapped with medical bills, the homeless man outside our church. God calls us to help them, whether they need shelter, assistance, medical care, or just friendship.

Tim Keller shows that caring for these people is the job of every believer, as fundamental to Christian living as evangelism, discipleship, and worship. But he doesn’t stop there. He shows how we can carry out this vital ministry as individuals, families, and churches. 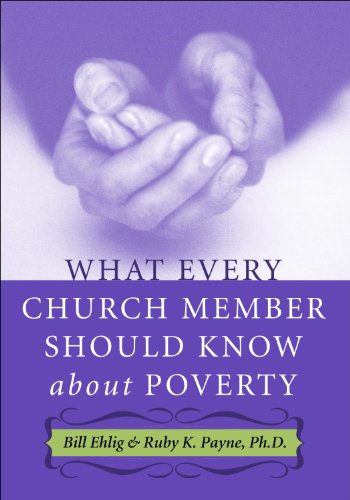 What Every Church Member Should Know About Poverty

What Every Church Member Should Know about Poverty is the most comprehensive and useful guide available for helping churches understand and reach out to people in poverty. Packed with relevant resources and eye-opening insights, this one-of-a-kind volume supports your heart, mind, and spirit in your efforts to live your calling. In this book you will learn:

– The unspoken cues and habits of different economic classes
– Communication and conflict resolution strategies
– Distinctive mindsets about family, marriage, and stewardship
– Who to help and to what extent
– Tips for transitioning newcomers into church membership 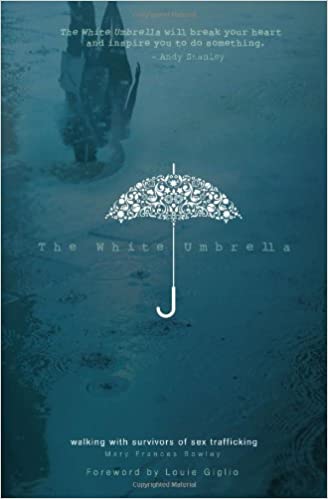 The White Umbrella: Walking with Survivors of Sex Trafficking

Sex trafficking. We hear about it on the nightly news and in special interest stories from around the world, but it occurs daily in communities all around us. Every year, thousands of young women are forced into sexual exploitation. Most are under the age of 18. The damage this causes to their emotions and souls is immeasurable.

But they are not without hope.

The White Umbrella tells stories of survivors as well as those who came alongside to help them to recovery. It describes the pain and the strength of these young women and those who held the “white umbrella” of protection and purity over them on the road to restoration.

This book offers principles and guidance to anyone with a heart for these hurting young women and a desire to help. It is an ideal resource for individuals or organizations seeking to learn what they can do to assist these victims in becoming whole again. 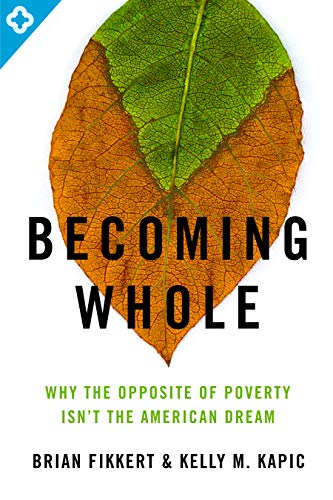 Becoming Whole: Why the Opposite of Poverty Isn’t the American Dream

We are the richest people ever to walk the face of the earth, but according to research, we aren’t becoming happier. Families and communities are increasingly fragmented, loneliness is skyrocketing, and physical and mental health are on the decline. Our unprecedented wealth doesn’t seem to be doing us much good.

Yet, when we try to help poor people at home or abroad, our implicit assumption is that the goal is to help them to become like us. “If they would just do things our way, they’d be fine!”

But even when they seem to pursue our path, they too find that the American Dream doesn’t work for them. What if we have the wrong idea altogether? What if the molds we are using to help poor people don’t actually fit any of us? What if the goal isn’t to turn other countries into the United States or to turn America’s impoverished communities into its affluent suburbs?

In Becoming Whole (building on the best-selling When Helping Hurts), Brian Fikkert and Kelly M. Kapic look at the true sources of brokenness and poverty and uncover the surprising pathways to human flourishing, for poor and non-poor alike. Exposing the misconceptions of both Western Civilization and the Western church about the nature of God, human beings, and the world, they redefine success and offer new ways of achieving that success. Through biblical insights, scientific research, and practical experience, they show you how the good news of the kingdom of God reshapes our lives and our poverty alleviation ministries, moving everybody involved towards wholeness. 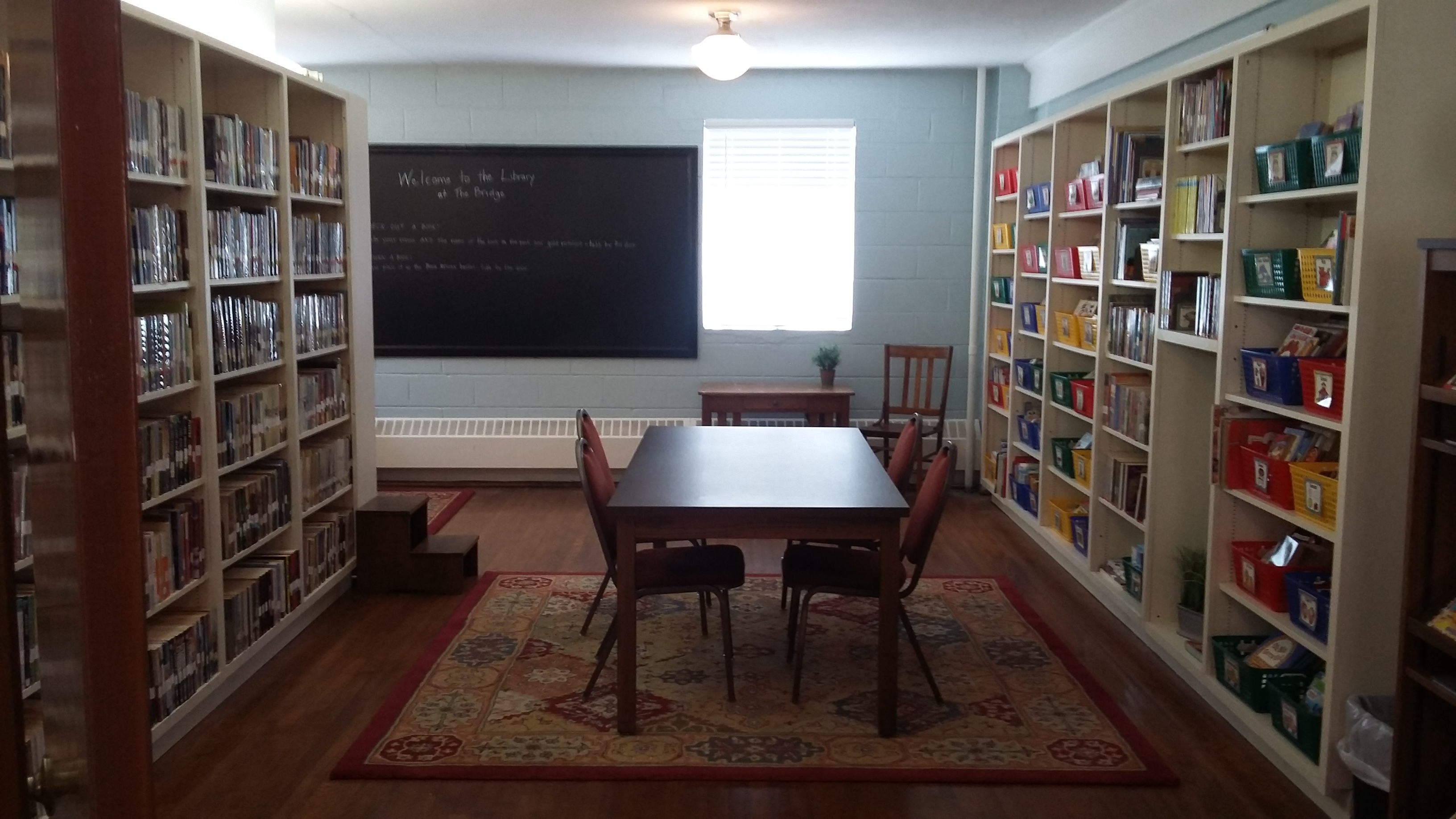 Everyone is welcome to visit The Bridge Library.  Come browse, read, and check out books. Please call 699-4321 to set up an appointment.

In 1889, our church planted Green Street Baptist Church near the Spartan Mill to reach the community for Christ. In 2016, 125 years later, the members of GSBC voted to give back to their “mother church” and The Bridge was born. Click below for the full history! 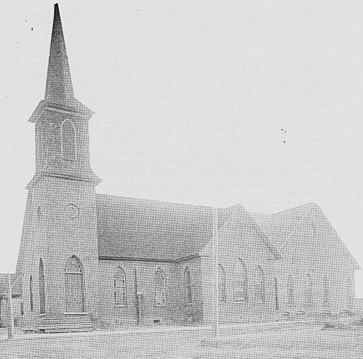 In accordance with Federal law and U.S. Department of Agriculture (USDA) civil rights regulations and policies, this institution is prohibited from discriminating on the basis of race, color, national origin, sex, age, disability, and reprisal or retaliation for prior civil rights activity. (Not all prohibited bases apply to all programs.)
Program information may be made available in languages other than English. Persons with disabilities who require alternative means of communication for program information (e.g., Braille, large print, audiotape, and American Sign Language) should contact the responsible State or local Agency that administers the program or USDA’s TARGET Center at (202) 720-2600 (voice and TTY) or contact USDA through the Federal Relay Service at (800) 877-8339.
To file a program discrimination complaint, a complainant should complete a Form AD-3027, USDA Program Discrimination Complaint Form, which can be obtained online, at www.usda.gov/sites/default/files/documents/usda-program-discrimination-complaint-form.pdf, from any USDA office, by calling (866) 632-9992, or by writing a letter addressed to USDA. The letter must contain the complainant’s name, address, telephone number, and a written description of the alleged discriminatory action in sufficient detail to inform the Assistant Secretary for Civil Rights (ASCR) about the nature and date of an alleged civil rights violation. The completed AD-3027 form or letter must be submitted to USDA by:
mail:
U.S. Department of Agriculture
Office of the Assistant Secretary for Civil Rights 1400 Independence Avenue, SW
Washington, D.C. 20250-9410; or
fax:
(833) 256-1665 or (202) 690-7442;
email:
program.intake@usda.gov.
This institution is an equal opportunity provider.